The Honda Rincon is the top of the line for Honda utility ATVs. After a few updates in 2010, it continues unchanged for 2013. It's main claim to fame is being the only ATV on the market to offer an automotive style automatic transmission, hydraulic torque converter and all.

While the Rincon is unique among utility ATVs, it's also unique among other Honda ATVs, since it is the only model with four wheel drive that doesn't offer power steering. Not sure why Honda made the choice not to offer that option on their most expensive and heaviest ATV, but they didn't ask us! 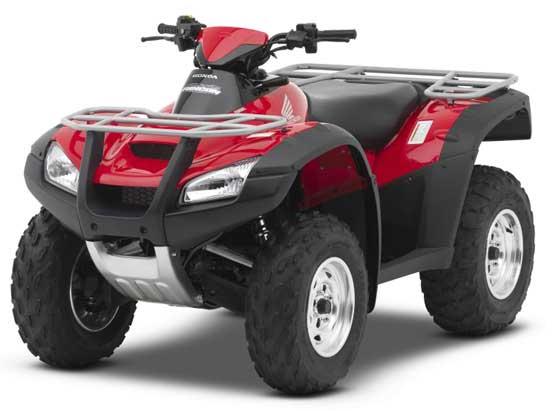 The 2013 Honda Rincon has a well integrated flow from racks, bumpers, skid plate, and body panels. Honda calls it the SUV of ATVs.

If you're not familiar with the Honda Rincon, you can watch the video below to catch up.

Just like the video says, the Rincon has an interesting combination of features compared to most utility ATVs today. We'll get into the details in the next section.

Engine - The Rincon engine is considerably larger at 680cc than any of the other Honda utility ATV single cylinders. But like most of the others, it's an OHV style with liquid cooling and fuel injection. It sticks with the longitudinal position in the chassis that Honda is now famous for.

Like most Honda ATV engines, this one is tuned for more low end pulling power and easy to ride tractability. It won't win any drag races, but it's deceptively quick from corner to corner in tight to moderate trail riding. The nice thing is that all this happens so smoothly that most riders can easily handle it with no intimidation factor at all.

Transmission and Driveline - The automatic three speed tranny is exactly like one found in cars. The shift lever is even similar to a column style shifter found in autos. For those that prefer to do it themselves, a handlebar mounted electric shifter is included.

It's handy if you want to keep the transmission in one gear for some reason, but the automatic is so smooth and works so well, that we think most folks will just use the fully automatic mode most of the time. 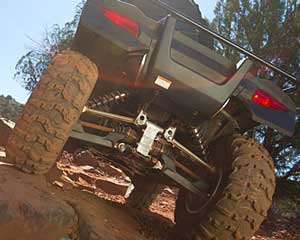 Suspension and Brakes - The Rincon is the only other ATV, along with the Rancher AT, in the Honda utility line that offers independent suspension at both ends.

Double a-arms handle the load at both the front and rear. The Rincon does offer more wheel travel and ground clearance by a slight amount over the Rancher AT.

You get conventional disc brakes at the front and an inboard disc brake at the rear mounted on the rear driveshaft for better protection.

In theory, the brakes are adequate, but the rear brake does have a different "feel". This arrangement just doesn't seem to be as effective as other four wheel brake systems.

We wouldn't call the ride and handling of the Rincon class leading, but it seems to match the intent of this Honda utility ATV. That would be casual to moderately serious sport utility style riding. The handling and ride work well at the speeds the Rincon engine and transmission can generate. 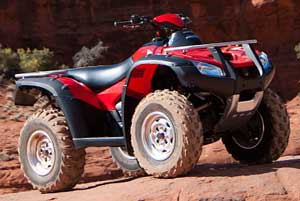 Our impression of the Rincon is a user friendly, easy to ride, hassle free to maintain, moderate performance sport utility ATV.

It's not about ultimate speed, huge power, or the most sophisticated technology. It probably won't win any bragging rights contests with your buddies.

Even though the Rincon is considered a big bore sport utility, it's very similar in size and weight to the Honda Rancher AT.

You have an easy starting engine. A broad, controllable range of power. The car-like automatic transmission. Bodywork that resembles an SUV. It all adds up to a very drama free sport utility ATV.

Specifications for the Honda Rincon.