Bombardier ATVs have been around since 1997 when the award winning Traxster was introduced. Followed by the race winning DS 650 sport ATV. Then came the entry level Rally series, which was later dropped. The mainstream ATV market really started taking the innovative Canadians seriously when the Outlander was unveiled.

Now that Bombardier has everyone's attention, they've decided to resurrect the Can-Am name they used for their dirt bikes back in the 70s and 80s. I was a motocrosser at the time and remember the likes of Gary Jones, Marty Tripes and Jimmy Ellis very well. 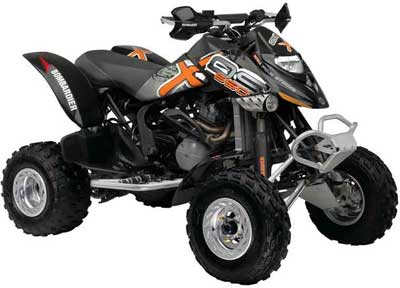 Good as these guys were, (and they were!) what really impressed us racers at the time was how this company nobody had heard of came out of nowhere to contend for and win championships. You just didn't do that. The Japanese giants eventually won the war, But Can-Am and their accomplishments impressed a lot of people.

Time moves on, and today Bombardier has become a leader in jet aviation among other things. Now you may not think that has a a lot to do with ATVs, but anyone that is competitive in the advanced aircraft business knows what they're doing when it comes to manufacturing.

They have also managed to acquire the well respected Rotax engine company. So between a core business of aircraft manufacturing, and in house engine manufacturing, I'd say that's a company serious about building world class ATVs.

So when you hear that Bombardier four wheelers are going to become Can-Am ATVs, take that as a sign that they're serious, and they're hear to win. And remember they have done this before! I expect to see a lot from these guys, they seem to really practice their motto,"Follow No One".

You can click here to see our complete guide to the new Can-Am ATVs.