The Honda Rancher AT model was introduced in 2009, and continues relatively unchanged for 2013. The Rancher AT with it's fuel injection, 4 wheel drive, and independent suspension at the front and rear, represents Honda's first step in the direction of a mid-size sport utility ATV.

Don't get the wrong impression, it's still much more utility than sport, but this Rancher is capable of some pretty spirited sport style riding. That's something you can't really say about most of the other Honda Rancher models. 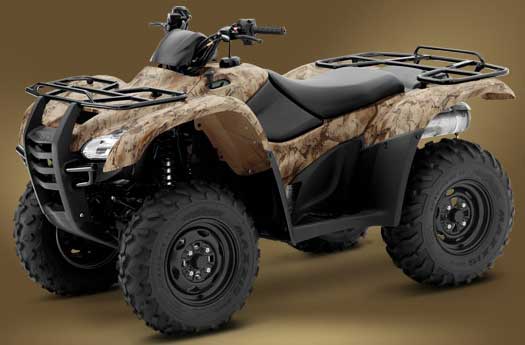 Check out the video test below to get up to speed on all the features of the newest Honda Rancher AT model. Don't worry that the test covers a 2011 model, there is virtually no difference in the 2013 model, except a higher price.

Engine - The Rancher AT gets the same engine as all other Rancher models. That would be a 420cc OHV single cylinder four stroke with liquid cooling and fuel injection. It also shares the longitudinal mounting position with other Ranchers.

This friendly little engine won't impress anyone with it's performance, but it starts easily and runs smoothly with good throttle response. New riders shouldn't be intimidated, but there is enough power to get most jobs done and keep experienced riders entertained at the same time. So all things considered, the engine fits the overall theme of this ATV very well.

Transmission and Driveline - The Honda Rancher AT sports one of the most sophisticated transmissions of any ATV. Some say that Honda is behind the times, but this gearbox says otherwise. The technology was developed in Formula 1 racing and just now is trickling down to production cars, and now ATVs.

It's called a dual clutch automatic and carries 5 speeds with reverse. It can be operated as a fully automatic or can be shifted with handlebar mounted electric buttons. Clutching is automatic like the Honda ATV manual transmissions. 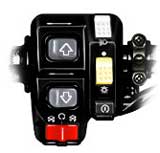 From the rider's seat, you pretty much put it in gear and go. In the automatic mode, shifts are clean and crisp and the ratios are spaced well for casual riding. More aggressive riders will probably want to use the electric shifter. They will find those shifts to be lightening quick compared to those of a manual transmission.

We think of the Rancher AT tranny as the best of both worlds. The direct feel and immediate response of a manual, but with the option of letting the computer shift for you in the automatic setting.

Four wheel drive is engaged by an easy to use lever to the left of the fuel tank. It can be engaged on the move as long as you're not going over 20mph. A limited slip torque sensing front differential is included, but it doesn't have a manual diff lock override. The Rancher AT isn't really intended for severe trail duty, so we don't think most owners will miss that option. Truth is, this system works fine in almost any situation you would normally be riding with this ATV. 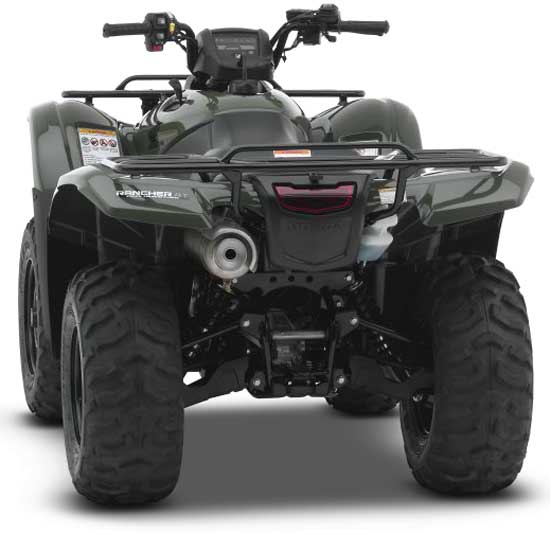 Independent rear suspension on the Rancher AT. Rear taillight assembly folds down to reveal a small storage space. Stock tires work well in most situations.

Suspension and Brakes - The Rancher AT stands alone as the only model in the Rancher group to offer independent rear suspension. It's only one of two Honda ATV utility models to be fitted with IRS, the other being the top of the line Rincon.

Front suspension is identical to other Ranchers, with double a-arms controlled by coil over shock and spring units. Wheel travel at a smidge over 6 inches is the same as the solid rear axle Ranchers, but the Rancher AT has better ground clearance at just over 9 inches versus 6.5" for the other Ranchers.

At anything more than a slow pace, the ride and handling of the Rancher AT is noticeably better than any solid axle Rancher. The rougher the terrain , the larger the difference. The short wheel travel limits it in some situations compared to some other sport utility ATVs, but overall it does a good job the majority of the time.

Among other features unique to the Honda Rancher AT, is the three disc brake system. Each front wheel carries a disc, and the rear gets a single disc, mounted inboard on the driveshaft for better protection. Performance is solid with no drama. The brakes don't really get your attention in either a good or bad way, which is fine on a sport utility ATV in this performance range.

Power steering - The torque and speed sensitive electric power steering is the only option on the Rancher AT since the electric shifter comes standard. We won't say it's a must have, but it sure is nice and greatly improves the riding experience in rougher riding.

It isn't so much about reducing steering effort. It certainly does that. The big advantage we noticed was the reduced kick back through the bars in rough terrain or when the front wheels were suddenly deflected by an obstacle. Situations that could lead to a loss of control otherwise were barely noticeable non-events with the EPS.

Another advantage of the power steering comes when 4 wheel drive is engaged. On most ATVs this always results is more steering effort. Bars can be suddenly wrenched out of a rider's hands if they're not prepared for the sudden pull of the front wheels. Electric power steering virtually eliminates this problem, letting the rider get on with his business without a second thought.

We have to say the power steering unit on the Honda Rancher AT works as well or better than any we've experienced on any ATV. It seems to feed in just the right amount of assist at just the right time. There's no doubt it really improves the riding experience. Once again, not mandatory but highly recommended.

Other notable features - A few other features worth mentioning include a stainless steel exhaust system for long life and no maintenance. Tubular steel racks on the front and rear provide a decent amount of space for moderate loads. The centrally mounted digital instrument cluster minimizes handlebar clutter.

Sticking with the theme of cleaning up clutter, you'll find a small storage space behind the rear taillight. Pop the seat off and remove a small snap-in panel, and you'll have easy access to the air filter, battery, and fuse box. 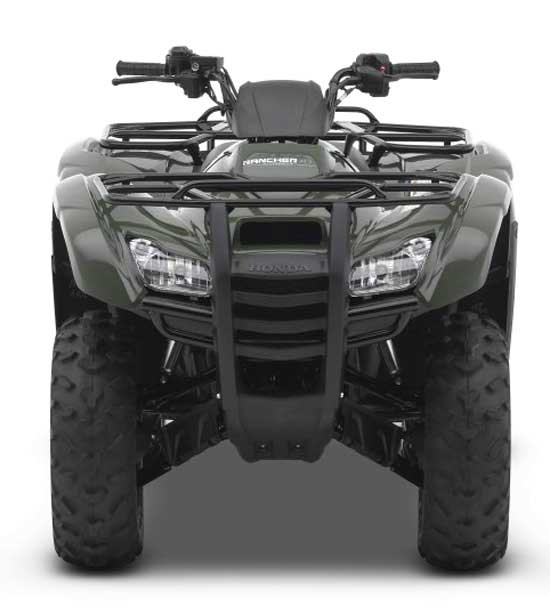 We see the Rancher AT having two groups of potential owners. The first group is Rancher fans that may be wondering if going with the top Rancher model is worth the extra money. The second group are folks in the market for a mid-size sport utility ATV that question if the Rancher AT should be included on their list.

So is the Rancher AT worth the premium price over more basic models? If you like Ranchers, but would really like to have the option of a fully automatic transmission, then yes. If you plan to trail ride with your ATV while still being able to use it for work chores, the AT may be a good choice. More so if your trails of choice are of the rougher variety. If you want the most comfort, add the power steering and that's about as much comfort and convenience as you could ask for in a mid-size.

What about the Honda Rancher AT as a pure sport utility? No doubt it's pricey for a mid-size, but it's also one of the most feature packed ATVs in that class. The slightly smaller size and tucked in bodywork make it a good choice for tight trail riding. Even with the smaller overall dimensions, the rider has plenty of room to move around thanks to the narrow tank and seat area.

Performance in tighter situations is better than the spec sheet would lead you to believe. The low end power of the engine, good throttle response, and no delay in getting the power to the ground with the transmission allow you to enjoy the ride.

The four wheel independent suspension soaks up most of the big hits with no drama and the overall handling inspires confidence. It all adds up to great maneuverability in tighter situations. The Rancher AT will handle wide open spaces, but that isn't what it does best. The limited amount of wheel travel, and lack of top end power spoils some of the fun for that type of riding. The power steering improves the sport style riding experience so much, we would highly recommend it, by the way.

The Honda Rancher AT has turned into one of Honda's top selling ATVs since it was introduced in 2009, and there's no reason to think that won't continue into 2013 and beyond. Owner surveys report excellent reliability and satisfaction with this Rancher.

When you weigh everything the Rancher AT does well, versus the few minor negatives, it would be a mistake not to consider it as one of the top choices in the mid-size sport utility class. 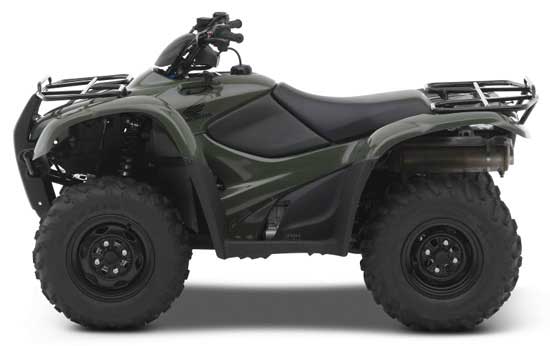 The Honda Rancher AT offers great maneuverability with smaller dimensions and tucked in components. Front and rear racks are standard. Enclosed body panels help shed mud, water, and other debris.