The Yamaha Viking will be the replacement model for the outgoing Yamaha Rhino. If you were a fan of the old Rhino, there will be plenty about the new Viking you'll recognize. In fact, other than the increase in size, the Viking has a familiar feel to it.

For those hoping for a more radical departure from the Rhino, the Viking feels way too familiar. Truth is, response from dealers and potential customers has not been exactly ecstatic. But Yamaha says the Viking is just the first of at least five new models that will be introduced in the coming years. So for now, let's dissect this new Yamaha Viking. 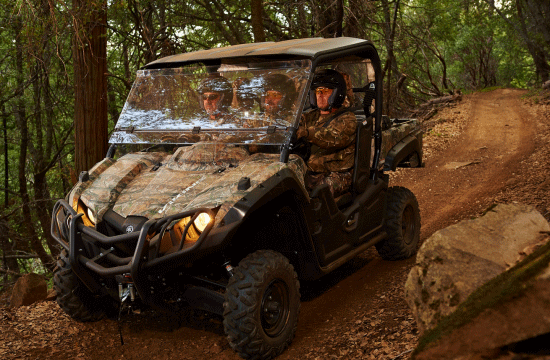 Engine - The same basic 686cc unit from the Rhino is carried over into the Viking. For those that don't know, it's a SOHC, 4 valve, liquid cooled and fuel injected four stroke single cylinder. 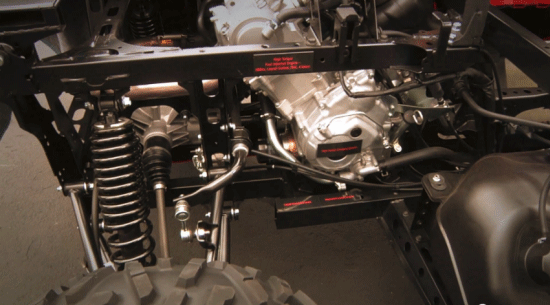 The Viking has the same basic driveline as the old Rhino - but with more power.

It gets some tweaks for the Viking, the biggest one is more compression for better low end power. Air flow has been improved, and along with some fuel injection magic, the Viking will cruise right up to a 50 mph top speed. That's 10 mph faster than the old Rhino.

The increase in power is immediately noticeable, even in the substantially larger Viking. Also noticeable is more vibration than we remembered from the Rhino. Other early owners have mentioned the same thing. Not a big deal, just something to be aware of. 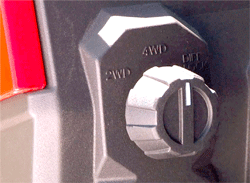 Transmission - Yamaha calls it an Ultramatic, but it's really a CVT with a centrifugal clutch added to eliminate CVT belt slippage. It's a direct transplant into the Yamaha Viking from the Rhino. As CV transmissions go, this one is probably the best of the bunch.

Final drive is selectable with a dash mounted knob. Choices are 2wd, 4wd with limited slip front diff, and 4wd with a locked front diff. Once again, same as the Rhino, and hopefully just as bullet proof.

Chassis - The difference in size is the most striking thing you'll notice when a Rhino and Viking are side by side. The Viking is based on an all new boxed steel chassis with considerably larger dimensions than the Rhino.

Five inches wider and nine inches longer may not sound like much, but better packaging maximizes the extra room so the Viking seems much larger. It is big enough now that you won't be able to carry it in the bed of a standard pickup like you could the Rhino. But there's also room for three adults without feeling too cramped. 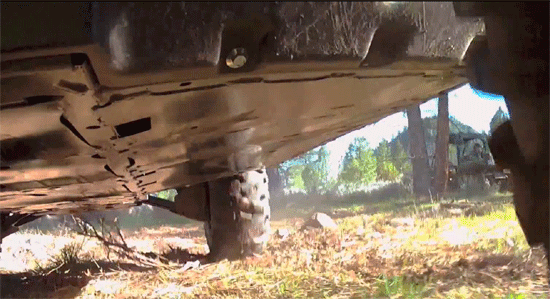 The Yamaha Viking gets a full coverage steel skid plate.

Protection for the chassis comes from a full length steel skid plate that appears to be substantial enough to do the job. Ground clearance is actually a little lower, at 11.8 inches, than the Rhino so it may come in handy.

Suspension - Not a lot of changes from the Rhino here. Almost an inch more wheel travel at both ends of the all independent suspension. More of a minor tweak than anything. Nitrogen gas shocks are included at all four corners for a smoother ride and less fade. 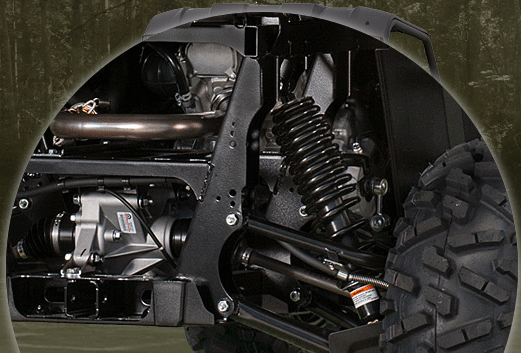 Brakes - Four wheel disc just like the Rhino, along with the twin piston calipers.

Steering - Like the Rhino, the Yamaha Viking comes with manual rack and pinion steering. Unlike the Rhino, electric power steering is offered on the Viking. Turning radius isn't as tight as the Rhino, so if your riding involves tight turning, things will be a little tougher with the Viking.

The EPS models run about $1,000 more than the base price. The standard steering isn't bad, but if you tend to ride in rough terrain, or carry heavy loads, the EPS makes life a lot easier. Not only is the speed sensitive steering lighter, but it greatly reduces kickback from sudden deflections of the front wheels. 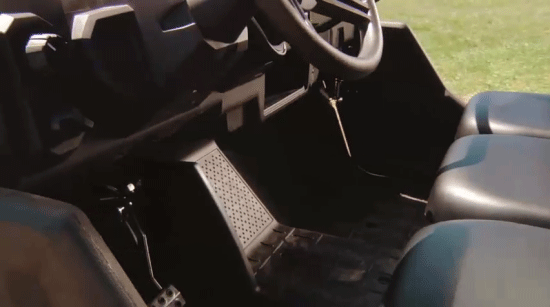 Seating for three with plenty of foot room.

Seats - We'll start with the most obvious difference from the Rhino - three seats in place of two. Not just seating for three, but three full size seats complete with safety belts. The center seat is offset to the rear for more elbow room, and the floor is flat all the way across for plenty of leg and foot room. 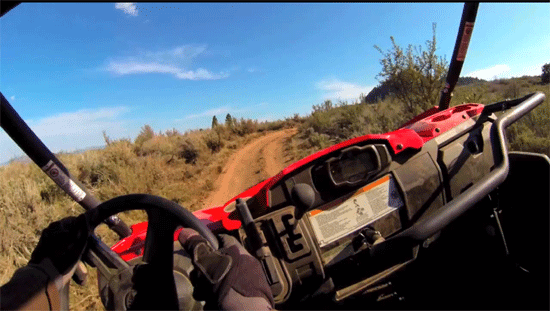 View over the Yamaha Viking dash.

Dash - The dash is chock full of controls. Drive selector is left of the steering wheel, with e-brake and shifter to the right. A digital multi-gauge dominates the center. Convenience items include four cup holders in the top of the dash, a glove box with door on the right,and a built-in covered 12v outlet.

There's also an adjustable passenger grab bar that's wide enough for both the center and right side passengers to hold.

Doors - The Yamaha Viking follows the trend of other new UTVs and comes with standard doors. They're roto molded (plastic) but seem substantial enough to withstand abuse. The latches appear to be heavy duty and capable of keeping the doors shut in rough going. 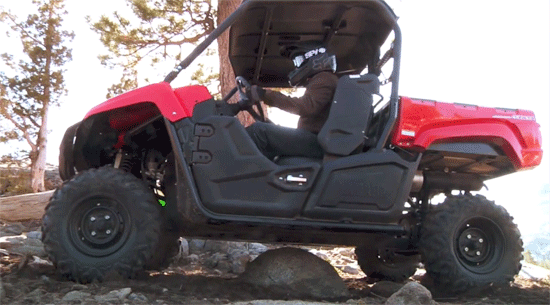 The Viking offers more protection than the Rhino with doors and shoulder guard.

You won't find any safety nets, and we didn't even see any offered in the listed accessories. There is a solid plastic "shoulder guard" on each side, which will help keep your extremities within the cabin. but we just like nets better.

Tilt bed - The steel lined bed can be tilted as a dump bed, with latches on both sides. It's also the right size to accommodate standard pallets and has built-in tie downs in each corner for load security. 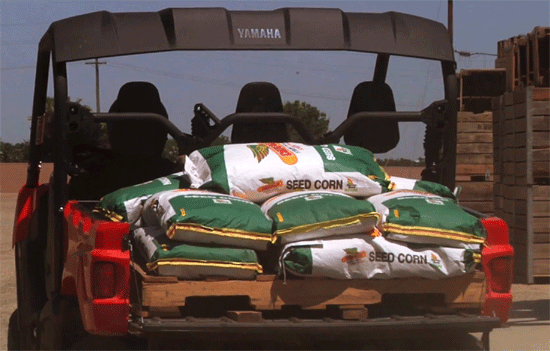 Cargo and towing capacity - Capacities for the Viking are up from the Rhino's ratings. Bed rating is 200 pounds higher at 600. Tow rating is 1500 pounds compared to 1200 for the Rhino.

Easy maintenance - The Viking design shows some thoughtfulness in the way most common maintenance items have relatively easy access. With the front hood and rear bed tilted up, most components can be reached. The under seat air filter can be serviced without tools - a nice touch.

Larger size - Considering the Yamaha Viking is more focused towards the utility side of things, the larger size would be a good thing. If your top priority is work over play, then higher load capacities and more room, along with an overall heavier duty feel, would be an improvement over the Rhino.

If maneuverability in tight spaces, and the ability to fit in the bed of a standard pickup were things you liked about the Rhino, then the Viking will seem like a step back. 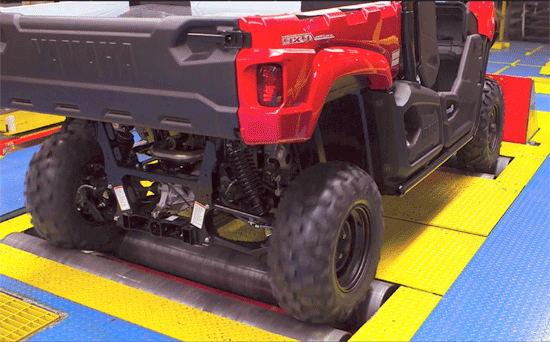 The Viking was developed and is built in the United States.

Like Honda with the Pioneer, Yamaha says the Viking is aimed at the larger utility market for side by sides. But Yamaha dealers don't seem nearly as excited about their new Viking as Honda dealers do about the Pioneer. Yamaha explained that the Viking is just the first of five planned new UTVs for the coming years. Somehow, it ended up sounding more like an apology to those expecting more from this first Viking.

But in fairness, we'll judge the Yamaha Viking on its' intended use, not what we thought it should be. The Viking is more useful for almost any kind of utility work than the Rhino. It carries more people, hauls and tows more, and is just a heavier duty UTV overall than the Rhino.

The big question is how does it stack up to the competition in the utility side by side class? Yamaha doesn't try to hide the fact that the Viking is aimed squarely at the Polaris Ranger. We wouldn't say there's a clear winner in that comparison. It might come down to personal preference for one make over the other, rather than any big difference n the machines.

The unexpected entry in the class is the new Honda Pioneer, and that could make the choice a little tougher, especially considering the price difference. Our suggestion would be to look hard at all three before you lock in on any particular model.

UTV Guide - Compare the new Viking to UTVs from other makes.