We know a lot of you are looking for a good used four wheeler. Specifically, a 4 wheel drive utility type ATV. The big question is which ones are good bets, and which ones are trouble? Seems like everyone has an opinion, but who do you believe?

So it was time to separate fact from opinion. Apply a little science to get to the truth. Filtering thousands of owner surveys for the answers you need was the best way to accomplish that.

The surveys asked owners to rate their used four wheelers in each of four categories: Performance - Reliability - Quality - Comfort. They were then asked for comments on likes and dislikes for each model. Only used four wheeler models with enough survey responses to be statistically relevant were included. 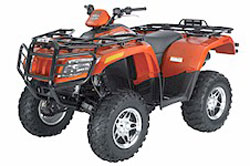 2005 500 4x4 - Liquid cooled engine, front diff. lock, independent rear suspension, hi-lo range 5 speed transmission. These tend to be bargain priced on the used four wheeler market, and with all the features, that's a lot of bang for your buck! 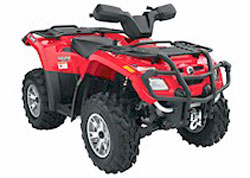 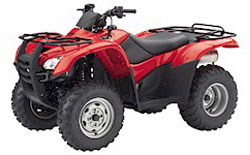 2009 Honda FourTrax Rancher AT Power Steering (TRX420FPA) - longitudinal mounted single cylinder engine with fuel injection and liquid cooling. Independent suspension at both front and rear, five speed transmission with automatic clutch and electric shifting. This one is turning into an owner's favorite since Honda added independent rear suspension and power steering to the already popular Rancher 420. 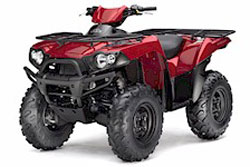 You would think the 750 would have been the highest rated Brute Force, but this is the one the owner's love.

This model was introduced in 2007 and quickly became one of the top selling Kawasaki ATVs. 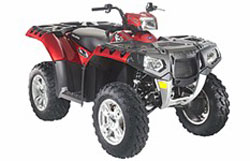 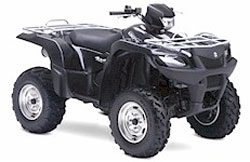 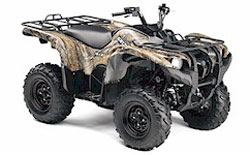 2007 Grizzly 660 - One of the best all around 4x4 ATVs. Good at both sport and utility riding. Liquid cooled engine, 4 wheel independent suspension, Ultramatic trans, and disc brakes. Owners love 'em.

2008 Yamaha Grizzly 700 FI Auto. 4x4 EPS - All the good Grizzly stuff with a bigger engine and electric power steering. An absolute rider favorite! Fuel injection and power steering make the big Grizzly even more fun to ride. One of the best sport oriented utility ATVs around.

Keep in mind that these are the absolute best of the best used four wheeler models. Only those with near perfect scores were included. Also remember that these surveys put a premium on overall owner satisfaction and not just reliability.

It's obvious that Yamaha dominated the results. Honda was long thought to have the edge in reliability, but when overall satisfaction was considered, the Yamaha ATVs came out on top.

Kawasaki finally put one of their models, the Brute Force 650, on the list.

After all the surveys processed, we feel comfortable recommending any of the ATVs on our list. For those looking for the very best used four wheeler sport/utility 4 wheel drive models - this list should be a great starting point.