The Polaris Outlaw 525S is a straight axle version of the 525 IRS, or a bigger engined version of the 450 MXR without the reservoir front shocks and lower sear height. 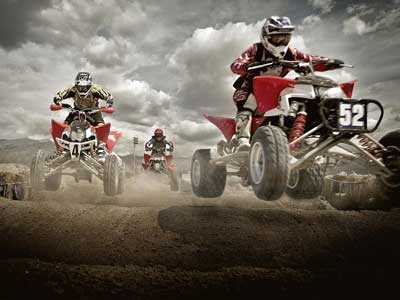 The S stands for "sand" - but this ATV will work in the woods or on the track too. The video below details all the updates for 2009, which continued through the 2010 model year as well.

Most of the changes fall into the category of tweaks. The revised steering will make the most difference where performance is concerned. And some changes to shock valving improves the stock suspension. 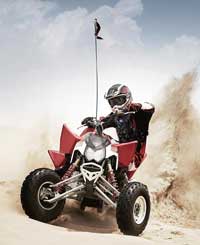 Outlaw 525S in its' natural habitat.

A nicely balanced package with a little bias to the extra power. Suspension is not quite as good as the 450 MXR, but that's understandable since the 525S is not being promoted as an ATV racer.

"The bike is lighter than all in its class, and the power is incredible. All this and I had to do nothing to the bike except a pipe and paddle tires."

"Unbelievable! I've ridden for over 10 years, many modified rides, and this quad is the ultimate ride for experienced riders!"

"I absolutely love it! It has extremely fast acceleration and a lot of torque! This machine is MX-ready right out of the box!"

The Polaris Outlaw 525S gives the sport ATV rider that prefers straight axle handling a choice. You don't want the more narrowly focused and smaller engined 450 - or the independent rear suspension on the 525 IRS?

Then here you go ... The lightening fast 525 KTM engine paired with the predictable handling and lighter weight of a straight axle sport quad.

I believe for it's intended purpose - sport ATV riding - it's ready to go right out of the box. If you want to do some weekend warrior racing, it might need a suspension upgrade but not much else. 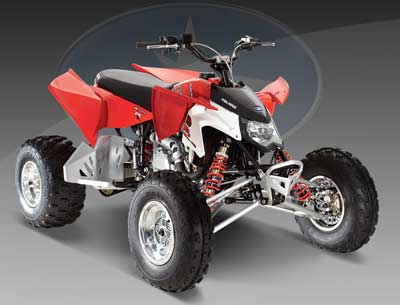 Polaris 4 Wheeler Parts - Where to Find the Best Deals.