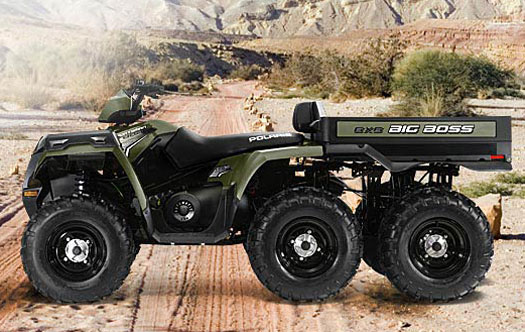 The Polaris Big Boss line has been around since way back when. It actually began with a 250cc two stroke engine powering the 6x6 workhorse. How times have changed!

For 2013 the "Boss" comes with an 800cc fuel injected, liquid cooled, four stroke twin engine with electric start. So now you can work from the high altitude mountains to the sea level beaches knowing you're getting the maximum power possible. Neither will you have to worry about cold weather starting - EFI knows best!

The PVT transmission (Polaris' name for their CVT) is back providing on demand 6-wheel drive. Now it's teamed with the EBS (engine braking system) and the disc brakes to give you Active Descent Control.

That's a corporate acronym way of saying you don't have to ride the brakes going down hills with a full load. And speaking of ride - it will be a smooth one with the all wheel independent suspension.

But let's be honest here - most folks won't buy the Polaris Big Boss for the Cadillac ride. No, most Big Bosses will spend their lives working. Since that's exactly what they were designed for, that's not a bad thing.

I won't bore you with details about the front cargo box (bigger than any other ATV's), the 1,500 lb towing capacity, or the rear dumping cargo box that will carry 800 lbs. Instead, we'll give you some quotes from some actual owner interviews. Because those are the only ones that really matter. 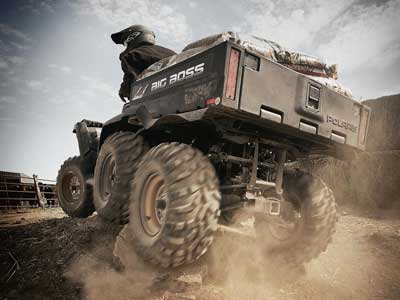 Six wheels of traction with the Polaris Big Boss!

"I guess I'll start by telling you that this machine is an absolute monster. I have tried time and time again to find out just what will stop this ATV, and as of yet have yet to find anything reasonable".

"One of the greatest features about this ATV is that you can switch from 4-wheel drive to full time 6 wheel drive in motion. No stopping, or putting it in neutral, just flip the switch, and the ATV will take care of the rest. The brakes, are disc brakes all around, and will stop you a lot faster than you think they will, even with a full load."

"This machine is a must have for any property owner that takes an active role in shaping his/her land. I have used this ATV to haul timber that I have just cut down, used it to clear paths in tall grass, and even to get me across the muddy bed of a nearby creek."

"It has hauled my portable saw mill, helped remove game during hunting seasons, and even stands up to the abuse my buddies and I give it just messing around on the land. And by the way hunters, we have hauled up to 3 large deer in the cargo area alone with this machine, and another will usually fit on the front rack. And no matter how many, you can fit, this machine will move it quick and effortlessly."

"The Polaris 6x6 is an absolute monster of an ATV and will handle anything and more than any ATV you currently use can. It is the greatest machine I have had the pleasure of using...Well, besides maybe the bulldozer we used to flatten some land. But a very close second."

I couldn't say it any better myself. The only common complaint was a feeling of some top heaviness and difficulty making sharp turns. But hey - it's a 6x6 utility ATV - kinda goes with the territory.

Even though the Polaris Big Boss has been around several years, the majority of owners still give it top ratings. And that's what makes it a real "Boss" in my book.