Wondering what the top kids four wheelers are these days? Yeah, so were we. So we got busy doing the research thing. Checked to see which models were getting the most interest from dealers. We pumped our sources for customer feedback and surveys. And we talked to several of our independent shop owning buddies about the reliability of the mini ATVs.

Some things we found out about kids four wheelers were what we expected - but we also had more than a few surprises. Of course, the best youth ATV for you will depend a lot on your personal situation, and what the little tike wants to ride.

Regardless of your needs, we think you will find several good choices for kids 4 wheelers from this Top Ten list. We'll include the features that will be important to you from each model for a quick comparison. So ... time to get started! 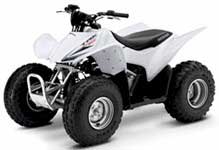 Honda - The little TRX 90 is powered by the typical indestructible Honda 4 stroke engine. Starting is hassle free with an electric starter. You get a 4 speed manual shift transmission with an automatic clutch. Final drive is by O-ring chain.

Suspension is independent on the front with a swingarm style at the rear. Travel is listed at 2.6 inches at both ends. Braking is handled by sealed drums front and rear.

List price - $2,999 - The Honda is pricey in the world of kids four wheelers, but much of that can be recovered by consistently high resale values. 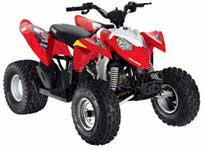 Polaris - The Outlaw 90 is more performance oriented with twice the suspension travel of the Honda and a peppy 4 stroke fan-cooled engine. It sports a CVT transmission with reverse. Electric start adds to the convenience. Final drive is by O-ring chain like the Honda.

Suspension is by standard independent A-arms up front with 5" of travel and by swingarm at the rear with 6" of wheel travel. Braking is by drums at both ends.

List price - $2,499 - The little Polaris ATV is $500 under the Honda. That's enough to get your attention. The knock on the Outlaw are some spotty quality problems and a few reliability issues. But it's still one of the most popular kids four wheelers around. 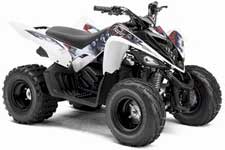 Yamaha - The sporty looking Raptor 90 is popular with a lot of pint sized riders. The reliable 4 stroke engine with electric start and the hassle free CVT tranny are popular with the parents.

No reverse gear continues the sporty theme - along with a rear disc brake to go with the front drums. Another O-ring chain supplies power to the rear wheels.

Industry standard double wishbone front and rear swingarm suspension are bolted to the mini-Raptor. 4.4" of travel at the front and 3.3" at the rear. Full floorboards offer some extra protection for young feet.

List price - $2,699 - The Raptor 90 slots between the Honda and Polaris kids four wheelers in both price and performance. 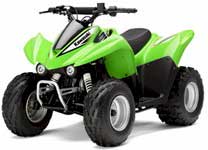 Kawasaki - The KFX youth models, along with Arctic Cat, use running gear supplied by Kymco. They're not all exactly the same, but the mechanicals are comparable. Don't assume that the quality is not up to par.

Kymco builds engines for some Honda and BMW models. I think the quality of their ATVs is definitely competitive with most of the name brands.

Specs are pretty standard for the class. 4 stroke engine with electric start, CVT transmission, chain drive, A-arm front suspension with swingarm mono-shock at the rear. Drum brakes stop the front with a disc brake at the rear.

List price - $2,699 - The KFX youth ATVs have been steadily gaining in popularity. There's not really much difference in the mechanical specs among the Kymco manufactured models, but a lot of kids prefer the sportier "look" of the Kawasaki kids four wheelers. 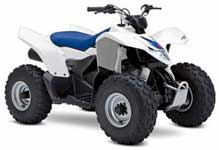 Suzuki - The Z90 remains a popular youth ATV among Suzuki fans. It's proved to be a solid choice with a good blend of performance, reliability, and value pricing.

Like almost all these kids four wheelers, a method of limiting speed is offered. The Suzuki Z90 kids ATV uses a limiting screw on the throttle.

List price - $2,499 - Since the Suzuki youth ATVs haven't changed much over the last few model years - neither have the prices. This one could be the best value among all the major manufacturers. 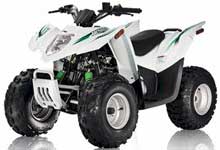 Arctic Cat - The DVX 90 shares mechanicals with the other Kymco manufactured youth ATVs. Like the other brand name companies, they wrap those mechanicals in their own bodywork.

The kids Arctic Cat ATV does add a reverse gear to the standard CVT tranny and a rear disc brake for a little something extra.

The other specs are the now standard four stroke air cooled engine with electric start, independent front and swingarm rear suspension, but they do throw in a headlight and taillight.

List price - $2,599 - Since so many of these kids four wheelers are so similar, we suggest shopping around at all the dealers in your area. See which one you like the best, and which one is willing to offer the best deal. We're not sure there is enough difference among the major brands to worry about that much. 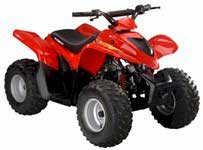 What isn't the same is the value pricing. If you have a good Kymco ATV dealer in your area, the little Mongoose would be worth a look. Build quality looks comparable to the popular brands.

List price - $2,299 -I guess you could just think of this kids four wheeler as an economy model of the Kawasaki or Arctic Cat. It doesn't come with some of the extras like lights. If you can live without those, we highly recommend you take a look. 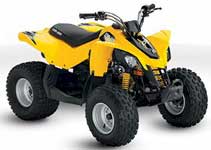 Can Am - The DS 90 sticks with the standard youth ATV formula. Air cooled 4 stroke engine with electric start for power. An automatic CVT transmission with forward and reverse.

Not so standard is the longer travel suspension at 3.5" in the front and almost 6.5" in the rear. A-arm front and swingarm rear style are standard types.

Brakes are drum front and rear, but if you do miss the rear disc brakes some other models are sporting, just console yourself with the halogen lights and full floorboards.

List price - $2,499 - The little Can Am ATVs are made in Vietnam and I have seen several mentions of reliability problems from owners. Others don't feel the performance is up to par. Just something you should be aware of if you're considering one. And why it's near the bottom of our top ten list. 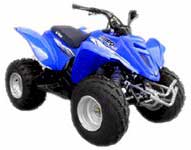 Eton - The Viper 90R makes the list based on some good owner surveys and increasing popularity for dealer inquiries.

This kids ATV is well equipped with another electric start air cooled four stroke engine. The rest of the running gear will also look familiar with an automatic CVT transmission including reverse.

The independent front suspension and swingarm rear suspension are right there with the class leaders. And the drum front and rear disc brakes are as good as the brand names.

List price - $2,249 - Like the Kymco, the Eton is comparable to the brand names - and in some cases is almost exactly the same as the brand names - for several hundred dollars less. Resale value may not be as good as the better known brands, but if you're willing to buy used, that could be a great way to find a good deal.

We don't think you will really go wrong with any of the choices from our Top Ten list. As usual, our recommendation is to find a dealer you like and/or trust - and stick with a brand he carries.

Price wise, the name brands tend to sell for more than the others, but many times they will also put more money in your pocket at resale time. That's how we look at the real cost of a youth ATV.

That was a large factor in the order of finish on our list, along with owner satisfaction and reliability.