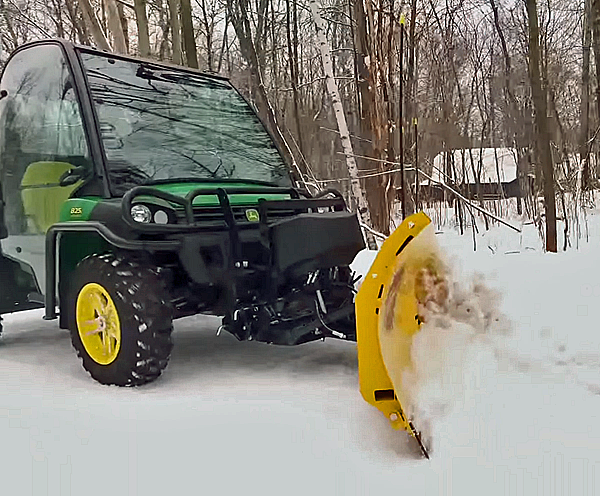 UTV and ATV snow plow systems are one of the most useful and popular of all the implements. A basic system is relatively inexpensive and easy to install. They can even make the drudgery of clearing your driveway and walkways almost seem like fun!

Front - Front mounts attach in the area around the front wheels. They tend to be used with smaller and lighter plows. Push tube frames tend to be shorter and lighter with these mounts. They are relatively easy to put on and take off quickly.

Front receiver hitch - These mount systems are usually combined with the push tube frame in one assembly. They are very compact and the easiest to install and remove.

These mounts are able to handle larger plows than most standard front mounts, since the receiver hitches tend to be stronger.

Mid - Connects to the frame somewhere between the front and rear wheels. Will usually have more attachment points than the front mounts, providing more strength and stability for the push tube frame and plow blade.

Full length - Attaches along the full length of the UTV or ATV frame. Some models plug into the rear receiver hitch and at connection points extending to the front of the machine. The push tube frames tend to be the largest and heaviest with this style mount. 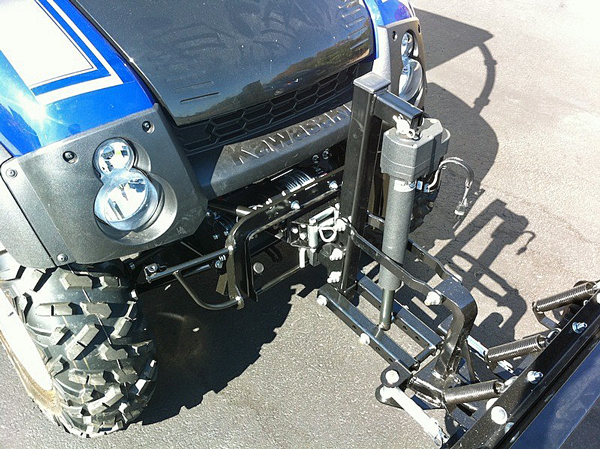 Tube frame that attaches to the snow plow mount and extends to the front of the ATV, providing mounting points for the blade and lifting system.

Push tube frames vary in length and size depending on the type of mount used. They can be short and light for front mounts, progressively larger and heavier for mid mounts. and fairly large and heavy for full length frame mounts. 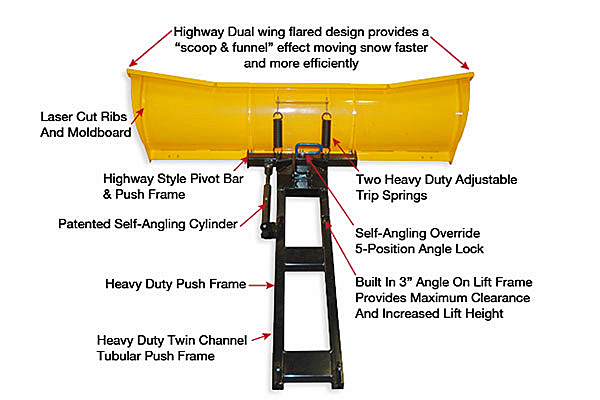 The business end of the ATV Snow Plow system. Sometimes called a moldboard blade due to the curvature of the blade.

Plow Blade Types - Blades come in two basic shapes - straight and V. A third type is called the box blade, formed by adding extensions to the ends of the blade called sidewings.

Plow Blade Construction - The two most popular materials for blades are polyurethane and steel. Most have reinforcing ribs on the back of the blade to help the blade hold its' shape and provide extra support.

The back of the blade will also have a series of stretch springs called "trip springs" designed to let the blade kick back when it hits surface obstructions. This prevents damage to the plowed surface and the plow, and a potential loss of control of the ATV. 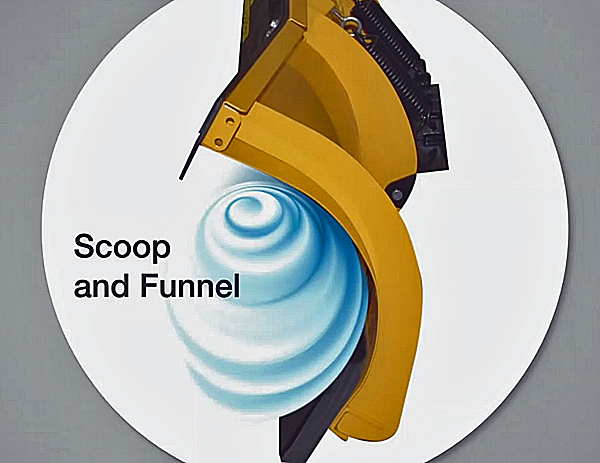 Straight blade – A one piece straight blade usually designed with a moldboard (curved) shape to roll the snow and prevent packing or loading up the plow. For most ATVs, 50" to 60" widths are recommended. UTVs can handle widths up to about 72 inches.

Most straight blades can be adjusted to angle to either side to varying degrees to allow for almost any plowing situation.

Box – A true box blade is a basic straight blade with sides added or "boxed" in to form a bucket shaped plow. Most dedicated box blades are extended at the top and bottom to help form a larger bucket so they can move more material per pass.

Box plows are most useful for removing snow, rather than just shoving it to the side like a normal plow blade. Great for clearing parking lots and larger open areas.

Optional side wings can be bolted to a straight blade to from a similar shape. They will prevent as much snow spilling around the edge as a normal straight blade.

V-blade – These are actually two blades connected by hinges in the center of the V shape. The angle of each blade can be set independently, making for maximum flexibility in setting the blade angles.

They can be run in any configuration from a swept back V shape for easier cutting in deep snow, to a straight blade for maximum width per pass, to a scoop shape that functions like a box plow. 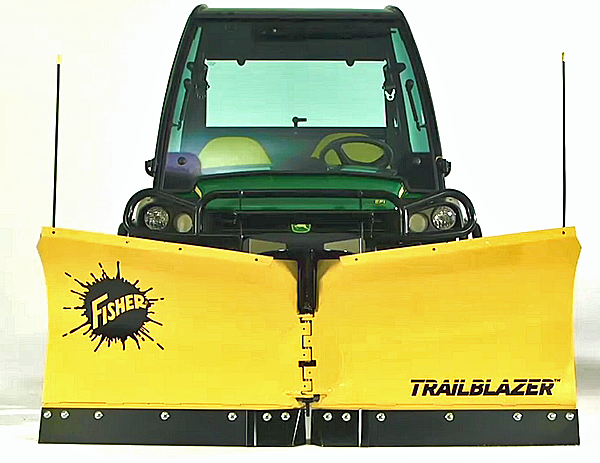 Hinged V-blade snow plows can be set in many different angles.

Manual - A tube or bar attached to the push tube frame or snow plow blade that is hand operated to leverage the blade up and down.

Winch - Uses an electric winch in its' standard mounting position and connects the winch cable to the push tube or blade either directly or with pulleys. The blade is raised or lowered with normal winch controls.

Linear Actuator - Basically an electrically operated screw jack. These have recently become more popular as a way to raise and lower plow blades that are attached to front mounted receiver hitches.

Some systems use small actuators to adjust the angle of the blade.

The advantage of this style lift is its' compact size and quick on and off since it plugs into the front receiver hitch. It connects to the four wheeler's electrical system with a simple electrical quick connector.

Another plus is the fact that the linear actuator can put extra downforce on the plow to help keep it in contact with the surface.

Hydraulic - The top of the line, most complex, and most expensive lift system. They use hydraulic cylinders to raise and lower the plow blade, and the top models add control of the blade angle as well.

They require a separate hydraulic "control unit" that has to be installed on the ATV or UTV. The hydraulic lines all run from this unit, as well as the electric controller that operates the system.

For most ATVs these would be overkill because the plows just aren't large and heavy enough to see much benefit. For larger UTVs that need to operate in heavy snow, that would be different.

An added bonus for UTVs with full cabs in very cold climates -  everything is operated by controls from the driver's seat.

The hydraulic UTV / ATV snow plow systems also have the abililty to put more downforce on the plow. 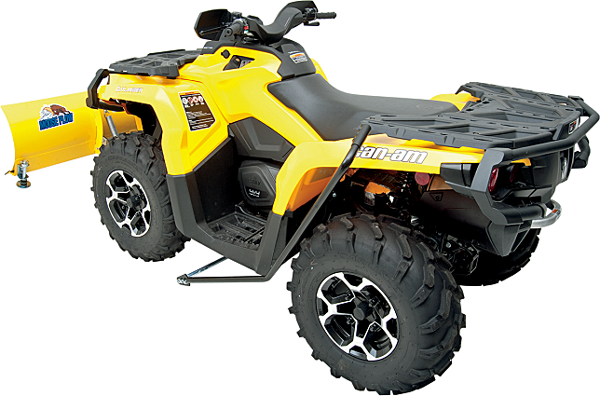 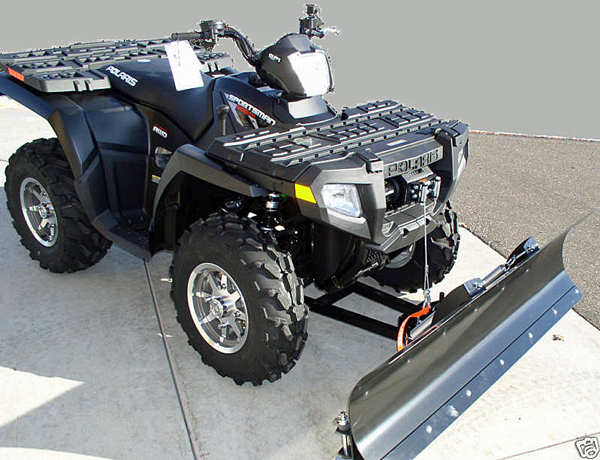 Best use is preventing gravel being scooped up when plowing snow from gravel surfaces.

Bottom wear blade - A full width cutting blade that bolts to the bottom of the plow blade. Normally made from thicker polyurethane or hard rubber. Lets the blade contact the surface directly without damage to the main blade or plowed surface.

Prevents gouging in asphalt or concrete surfaces. Allows the blade to glide more smoothly without hanging up on uneven surfaces.

Blade Markers - High visibility poles or posts that attach to each side of the blade so the driver can see where the edges of the blade are. More needed on wider plows and UTVs with more limited visibility from the driver's seat. 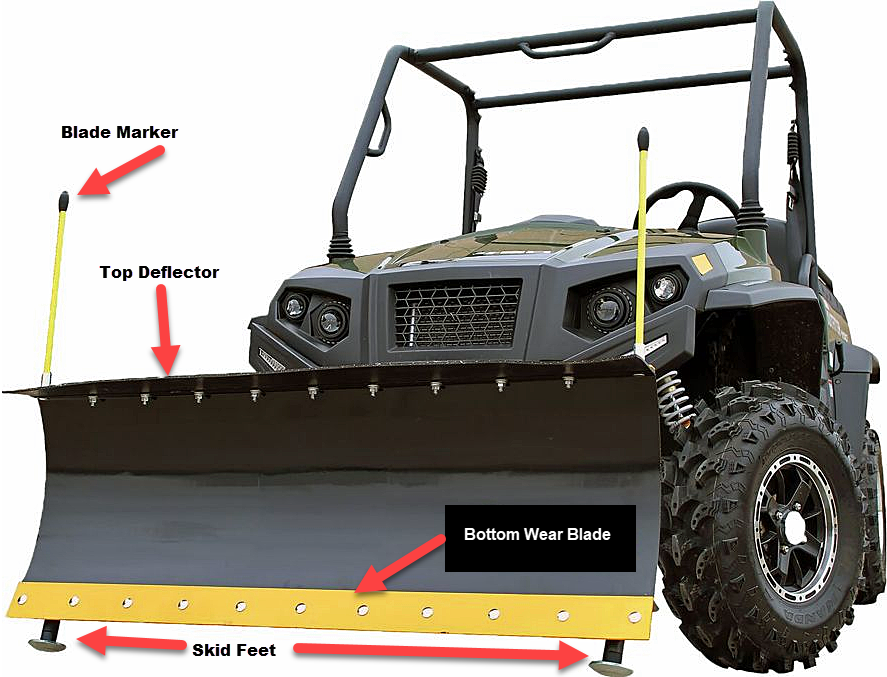 Plow Side Wings - Plates that bolt on to the sides of the plow blade to form more of a bucket. Designed to keep snow in front of the blade so it can be moved from an area instead of just shoved to the side.

Plow Weight Bars - Weights that attach to the top of the blade to provide more downforce to prevent the blade from riding up on the snow. 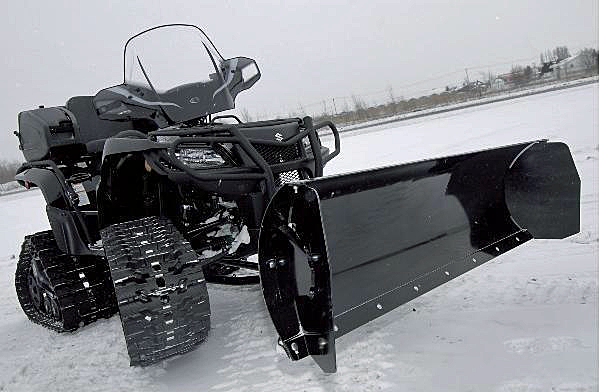 ATV snow plow with bolt on side wings.

Most mid sizes can handle a narrower plow in the 50 inch range as long as the snow isn't too deep or heavy.

Mounts and push tube frames for the smaller plows will fit the mid size ATVs the best.

Large ATVs can handle plows up to about a 60 inch width. Their larger physical size works well for the larger mounts and push tubes required by the wider plows.

Mid size UTVs are larger than the largest ATVs. They will normally take at least a 60 inch plow, and may be able to go even larger.

A full size UTV can handle up to a 72 inch plow with no problems in most cases.

For pushing a UTV or ATV snow plow, the more weight the better. The weight of the vehicle has to counterbalance the weight of the snow being pushed by the plow. Not enough weight, and the plow will end driving the ATV.

Ballast weight can be added to the rear of the ATV if this becomes a problem. Within reason. If you stick with our plow size recommendations, it shouldn't be a problem.

Most UTVs weigh enough that this won't happen with the recommended blade widths. On the rare occasions it might, most UTVs have a handy bed for adding weight. 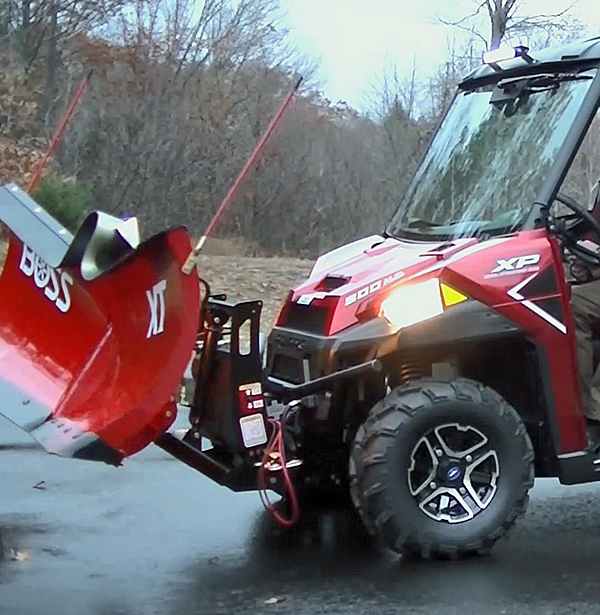 A large UTV has enough weight and power to push a V-blade plow in a scoop configuration.

Running a snow plow system for an ATV or UTV is more about engine torque than top end power. Smaller engines just aren't capable of producing much low end torque. That's why we favor at least a 400cc engine in a mid size ATV as a minimum for snow plowing.

Most mid size UTVs today have at least 500cc engines, so they work well with the mid size plow systems.

Even though some ATVs have 1000cc engines and gobs of power, we still feel their smaller physical size limits them to a 60 inch plow.

UTVs with engines in the 700cc to 1000cc range will usually have enough torque to run up to 72 inch plows.

Some snow plow systems can add a substantial amount of weight to your four wheeler. This puts more strain on stock suspension systems, especially the springs and shocks.

A wide, heavy steel blade can compress the suspension even more when in the lifted position.

If this is the case with your system, a change to heavier duty springs and shocks may be necessary. 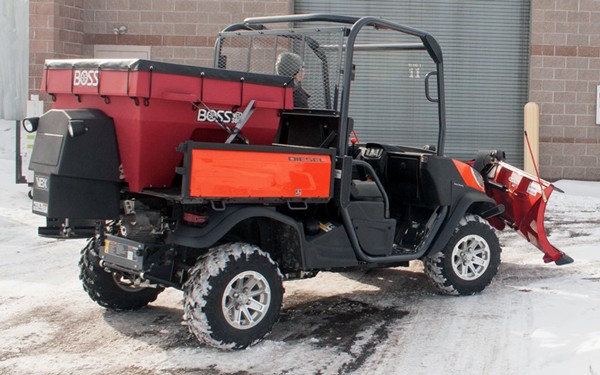 A UTV with plow blade and bed mounted de-icer spreader.

For pushing a UTV or ATV snow plow, most all terrain type tires on a four wheel drive machine will do the job. For deeper and looser snow, tires with more widely spaced and larger lugs would be better.

If you're dealing with an ice surface underneath, tire chains can be added for some extra traction. Some others like to use tire studs installed on inexpensive turf style tires and cheap steel wheels. These can be quickly installed when needed.

We hope this guide has given you a better understanding of UTV and ATV snow plow systems. Let us know what you think in the comment section below.